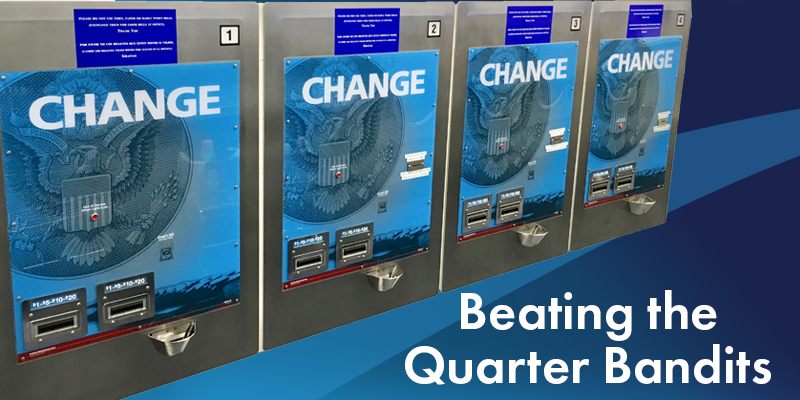 Changers are caught in the middle of a tug of war at the laundromat. It’s there that you’ll find people pulling quarters while operators struggle to hang on to their precious coin supply.

The ones doing the yanking are those sly devils who take advantage of convenient change-making and then spend their booty elsewhere.

Whether they make a beeline to the dispenser or hang around until the coast is clear, quarter bandits rob laundries of valuable currency used by paying customers.

The uptick in coin snatching stems from poor circulation continuing to plague a pandemic-weary country. Millions of quarters flow out of the U.S. Mint yet lay dormant in households. The actions by our nation’s less than accommodating banking system certainly hasn’t made things any easier.

A check of social media reveals plenty of aggravated laundry owners out there. The rants are peppered with creative strategies to regain control of automated cash exchanges. Some impose a fee by shortchanging payouts. Others are disabling higher denomination bill acceptance or going so far as shutting off electricity to the changer when a non-regular dares to step up.

While protecting hopper inventory for in-store use makes perfect sense, these drastic measures don’t. Change-making is an amenity just like folding space and air conditioning. Creature comforts at the laundromat shouldn’t come with charges, restrictions and added oversight.

Kicking out 19 quarters for a $5 bill or denying customers the opportunity to break tens and twenties flies in the face of the self-service laundry model. And keeping one eye on the camera along with a finger on the changer’s kill switch is simply a waste of time.

I get the frustration. One of my pet peeves managing coin-ops was getting played by the bandit’s hit-and-run antics. I’m still waiting on those clothes baskets that were supposedly sitting out in the car.

Changing up the change

That’s not the case these days. Owners are seeing hopper levels drop and access to bank inventories dry up. Everyone is looking for a solution.

The answer, as it turns out, was always right there at the change machine.

Just ask San Diego operator Scott Badarak. His unattended laundry chain thrives around apartment developments minus the quarter drain. He switched to dispensing tokens from his dual hopper changers years ago and never looked back.

“I needed some way to control my stores,” he explained. “I knew if I go with tokens and put the signage up, then everything that goes out of those machines will be used there. I won’t have people coming off the street.”

Badarak continues to welcome walk-in quarters alongside his changer-dispensed tokens at every washer and dryer by employing multi-coin drops.

Enter dollar coins. Like tokens, they aren’t the currency of choice at multi-housing complexes.

Dispensing a mixed payout of quarters and dollars — or dollar-valued tokens — caters exclusively to in-house laundromat customers, not apartment dwellers. And that blending works just as well to halt the parade of neighborhood businesses feeding in twenties to restock cash registers down the street.

Dual coin or coin-token combinations are proven solutions to the quarter dilemma much of the industry largely overlooks. A recent Facebook poll conducted by Laundromat Owners Showcase revealed 77% of operators maintain the long-standing protocol of changers paying out a single denomination coin.

How to win a tug of war

Change-making is one of self-service laundry’s modern marvels. The advent of multi-bill acceptance aligned well with a growing consumer appetite for multi-load equipment.

For decades, operators have grown accustomed to big bills coming into their changers and small coins going out. The majority still deliver the equivalent of two full rolls of quarters for a twenty. No wonder the laundromat is treated like a community bank.

Want to win the tug of war against quarter bandits? Dig in your heels and grab hold of dollar coins or tokens.