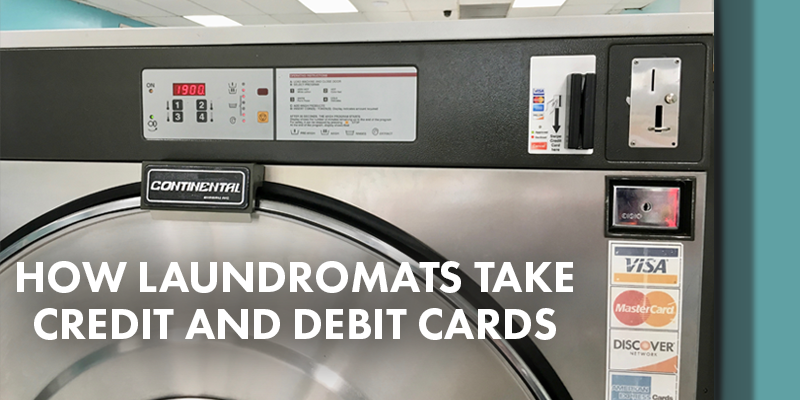 Hold on to your wallets. A credit card-ready laundromat doesn’t have to break the bank.

All it takes is a way for customers to do laundry with their card. It’s that simple.

Store owners looking into credit card acceptance have a number of choices at various price points. Among the options are field-proven ways to introduce plastic with little or no investment.

Cards with new, enhanced security? You bet. And the same could be said for that other old school payment method, cash.

One thing’s for sure, father time has been very kind to credit cards.

Western Union launched “metal money” cards with free deferred payment privileges more than a hundred years ago. In the 1920s, oil companies and hotel chains rolled out their own consumer cards, followed a few decades later with the first universal card offering by Diners Club.

Credit cards are now a multi-trillion-dollar platform. Visa — the leader of the pack — rings up $2 trillion annually in U.S. payment volume and spends a whopping $100 million for marketing.

The Federal Reserve reports credit card transactions for non-bill payments surpass cash while trailing its other rival, the debit card.

Four decades of plastic in laundry

I witnessed firsthand how credit cards entered the self-service laundry space. Back in 1984, our flagship store sold rolls of tokens at the drop-off counter using a manual card imprinter.

Automation arrived to the industry, and by the mid-1990s proprietary card stations both accepted and dispensed plastic. Shortly thereafter, the action pivoted to the machines themselves with the introduction of individual card readers.

Along the way, ATMs came online, serving as a convenient cash conduit for changers. And some of those change machines soon sported card devices to facilitate token sales.

Most recently, credit/debit cards loaded to smartphone apps and mobile wallets — with or without the aid of a kiosk — arrived on the scene.

This month’s Laundromat Owners Showcase poll provides a snapshot of what’s going on today. Over one-quarter of respondents offer a credit/debit card option via walk-up kiosks, washers & dryers and/or ATMs. The option for patrons to self-load mobile pay apps with credit/debit cards comes in at 13%, and offering card-to-token dispensers at 3.7%.

Let’s take a closer look at these.

Credit card at the machine

A credit/debit card reader installed on washers and dryers has been the go-to model for several years. It’s also one of the most cost intensive. Think of it this way: An average 60-machine laundromat equipped with readers boasts more payment devices than a big box retailer.

Many operators — and those who supply them — say the convenience of wallet-to-wash credit card acceptance outweighs the price to equip and maintain a reader fleet.

Operators have the option to install readers as an add-on to coin-operated machines or serve as the exclusive payment format.

And while coin/reader hybrids are a common sight, the coin-op side usually remains quarter-only — sadly ignoring the benefits of higher denomination dollar coin acceptance.

Credit Card at the kiosk

Stepping up to a kiosk with a credit card to facilitate a transaction has long been part of the laundromat scene. In a central pay format, patrons can use cards to activate selected machines at one spot rather than repeating the process in front of each washer or dryer.

Central pay has caught the attention of operators of late after falling off the radar with its earliest iterations. The advent of smartphone apps is fueling the renewed interest.

Machinery manufacturers and large chain operators have been focusing on the kiosk more and more to engage customers to load funds to apps or loyalty cards. They’re banking on plastic-to-phone and plastic-to-plastic at the kiosk as the way to pay.

Some kiosk stores are debuting with less laundry machine hardware onboard, eliminating readers and, in some cases, even removing the vital payment redundancy provided by coin drops.

Credit card on the app

The marketing of laundry smartphone pay apps and mobile wallets has grown exponentially. Customers are invited to load funds by keying in credit/debit card credentials to their personal device.

That streamlining translates into connectivity inside machines and oftentimes no kiosk. The departure from costly external hardware has motivated many who were previously on the fence about introducing credit cards.

But while the price point of mobile pay remains attractive to laundromat owners, adoption rates by their patrons isn’t so pretty. As noted in an earlier blog, six-in-ten store operators see less than 10% of machine revenue generated through apps.

Credit card at the ATM

Here’s a no-cost way to be credit card-ready. Invite an ATM route operator to place a unit at your laundromat. Arriving customers can get cash, then turn to your changer for wash and dry coins. You won’t come out of pocket to welcome cardholders. Instead, you’ll pocket a share of the transaction fee proceeds.

Owning an ATM outright remains a popular choice. One Minnesota operator summed it up nicely: The ATM is the most profitable machine in the store and doesn’t even take up floor space. Indeed, his wall-mounted, rear access unit complements the changer bank with a convenient credit card-to-cash vehicle.

Credit card at the token dispenser

Those same customers who show up with wash and no cash can go home clean with a credit card-to-token setup.

In addition to inserting bills at the changer bank, patrons have the option to swipe or dip their credit/debit card, select a desired payout of tokens, and redeem them at washers and dryers equipped with token or coin/token acceptance drops.

Compared to employing an ATM, card-to-token is quicker and cheaper for the customer as it eliminates a step and the transaction fee. Owners carry the nominal processing cost.

Bonus token payouts are typically offered on card transactions of $10 or higher. Dispensing quarter-value tokens, dollar-value tokens or mixed denominations are among the available options.

The token-op laundry format is both card-friendly and wallet-friendly. It’s one stop, one reader and one cost efficient way to accept credit and debit cards.