Laundromat Pay Goes Round and Round 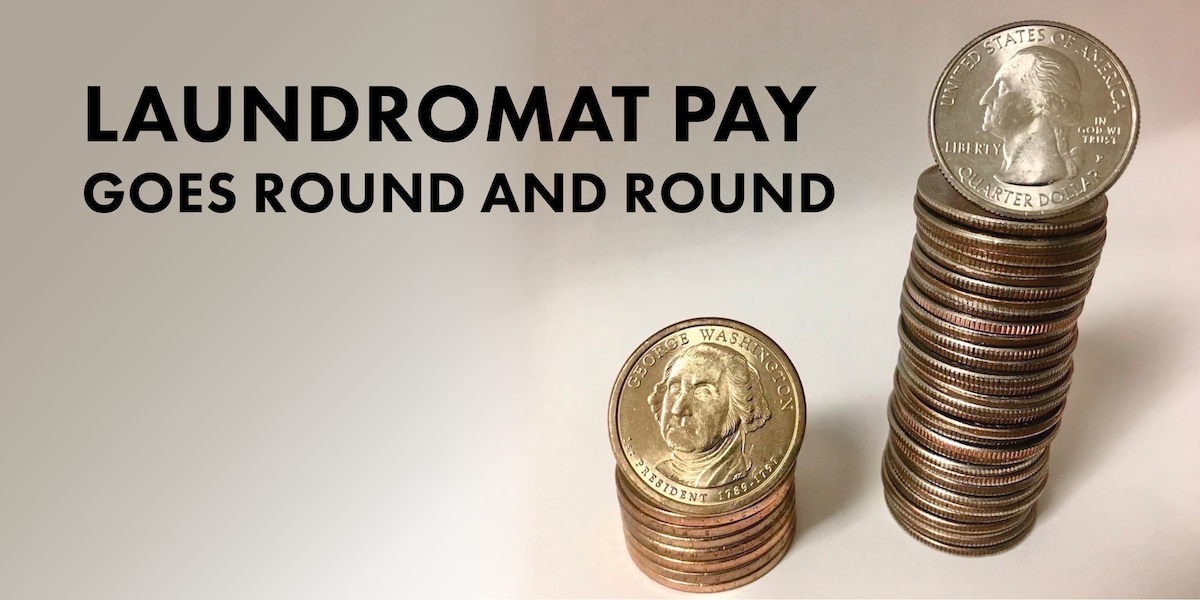 Laundromat pay’s mixed messaging sure can be confusing.

One veteran store operator summed things up nicely on social media: “I suppose this is what we call ‘coming around full circle.’”

Round and round indeed.

Wash day pay can be pretty simple: Toss clothes in a drum and coins in a slot. It’s not quite the same for those using cards or phones, where there’s usually registration and navigation before agitation.

The industry didn’t get plasticized and mobilized because coins broke. We got here because there’s big money in replacing small change. Kiosks here and fees there — believe me, plenty of providers are making out quite well.

Contrary to what you may have read or heard, coin continues to dominate. Old school quarter is graduating to the new school dollar. Coinage is still round and, yes, it’s still around.

Loyalty card advocates have long sought to redefine the self-service laundry experience by eliminating coins. One of the major hurdles has always been to convince operators to give up something both they and their customers were comfortable with.

Winning over owners isn’t easy, but taking swipes at quarters is. The card lobby successfully turned “coin” into a four-letter word, dissing it at every step of the laundry cycle — from acceptance and collections to change-making and banking.

Yet despite all the huge media spends, advertorials and national trade association cheerleading, proprietary loyalty cards have never lived up to the bold predictions of dethroning King Coin.

To help keep plastic in play, some suppliers introduced hybrids — welcoming loyalty, credit and debit cards, along with the previously taboo coin compatibility. Seemingly overnight, word on the street went from getting rid of your quarters to letting them be.

I guess that old saying is true: If you can’t beat ’em, join ’em. And what better evidence than a big name in card pay placing “coin” at the tippy-top of its hybrid reader’s acceptance menu.

That change of heart never filtered down to proprietary card marketing, where the constant drumbeat to eliminate coin plays on, peppered with a laundry list of so-called “hassles” associated with the traditional pay format.

One card pay provider’s website highlights the “daunting task” patrons face depositing dozens of quarters to start a load. The oft-repeated storyline takes a familiar dig at the industry’s smallest coin while carefully avoiding any mention of the larger dollar.

Last month’s card reader launch announcement was another reminder of the mixed messaging going out to laundromat owners. Ironically, those new devices are coming from a smartphone pay supplier best known for promoting an app-based solution for credit and debit card transactions at any machine “without the need to buy expensive hardware.”

Sure, pay-by-phone technology still rings true, but it begs the question: Why would a leading voice in the app movement suddenly embrace the very thing it aims to replace?

Virtual pay gets a reality check

Phone pay is billed as a better mousetrap — smarter, faster and cheaper — especially when it comes to handling credit and debit cards. Laundry customers interact with their own handheld devices rather than those mounted on machines. The same holds for coins. An app could disrupt all that action at readers and drops.

For me, this technology was always about offering “virtual” tokens. Whether or not people would load and spend them remained to be seen.

Four years ago, I was on the Clean Show floor demonstrating how a virtual token app could work in tandem with real coins and tokens. It was a nifty pairing that added a new dimension to traditional cash and cashless coinage.

Phone pay struggled to gain a foothold when it ultimately made its way on to the laundromat aisle. With few exceptions, virtual coinage was getting trounced by the real thing.

The lowdown on low numbers

Fast forward to the present. Laundry’s mobile bandwagon is on a roll, thanks in large part to freebies and app compatibility built into a wide range of machine operating systems. But while owners seem willing to adopt the technology, their customers appear reluctant to tap the app.

If online polling by Facebook’s Laundromat Owners Showcase can be used as a bellwether, pay-by-phone still isn’t getting much traction. Three-in-four operators recently reported mobile options generating less than 20% of total machine revenue, including a 45% share of owners registering under 10%.

A thread on another laundro-centric Facebook group offered more anecdotal evidence with a total of just three operators willing to chime in with their store’s mobile pay usage rates — one at 15% and two at 10%.

To be fair, smartphone pay is a newbie at the laundry, where things never turn on a dime. And the industry sorely lacks published data on consumer app usage — not owner adoption — to help track trends.

Here’s a little food for thought on the most recognized name out there. Just 6.1% of U.S. consumers with Apple Pay activated on their iPhones use it for in-store purchases, according to a national study conducted in August by media platform PYMNTS. Bear in mind that Apple Pay has been around for seven years.

I won’t speculate as to whether or not lackluster phone pay use by the public played a role in the launch of laundromat’s newest line of card readers. Only time will tell if the rollout marks another U-turn for the industry.

What about the message it’s sending? Perhaps that the latest pay disruptor isn’t very disruptive after all.