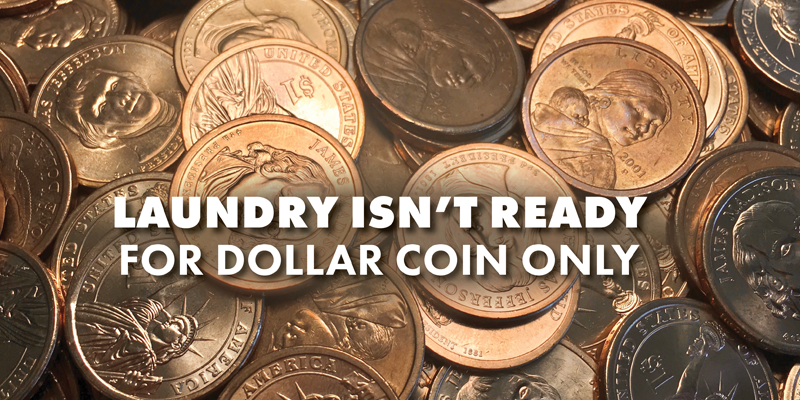 I once asked the wisest man in coin-op pay to predict when quarters would disappear from laundromats. His response: When the cheapest wash tops $5.

It sure looks like we’re in for quite a wait.

Seven decades after the first meters were installed, small washers average under $3 a load. At this rate, who knows when they’ll ever hit five bucks, let alone surpass it.

For some laundry owners the waiting game is over. Their coin patrons have one choice: Big.

Welcome to the Dollar Coin Only laundromat, where one size fits all. Got quarters? Sorry, no dice.

I’m a big fan of big coins, but not this setup. Laundromats simply aren’t ready to run on dollars alone. Allow me to explain.

Customers aren’t ready. They save up quarters and expect to spend them.

And then there’s this: The U.S. Mint produced 2.7 billion new quarters last year and churns out millions more each month. That’s on top of the billions already in circulation. Dollar Coin Only machines will reject them all.

It begs the question as to why anyone would turn away the most commonly used coin in laundry at the point of sale.

How we got here

Today’s quarter vended stores evolved after decades of mixed coin use. Nickels, dimes and quarters kept circulating until conditions were ripe to preserve just one.

The quarter went solo after it was universally accepted and priced in at every machine. But as efficient as that single coin was, it started looking mighty small as washers grew larger.

When front loaders started edging out top loaders, the quarter’s weakness was exposed. It was painful to watch customers fill, push and pull a coin slide not once, but twice. And to see owners having to collect so often.

Leonard and Ray Susmarski had the solution and helped blaze a trail for dollar pay back in the 1980s. The brothers stocked up on the beleaguered Susan B. Anthony coins, applied paint, and circulated them alongside quarters at their Hart’s Coin Laundry chain in Chicago.

While employing dollars was a novelty, mixing coins wasn’t. Up until the time quarters took over, laundromat changers kicked out two or three different small denomination coins which were then deposited in machines either individually or as a combo. The Susmarskis merely supersized things with their dollar-quarter pairing.

Dual Coin with the Susie B was extremely successful at Hart’s and other stores, but never embraced by the industry.

Operators got a second shot with the minting of a redesigned “golden” dollar and the rollout of multi-coin acceptance drops. Finally, their overflowing money boxes would have some breathing room.

Most chose the Dual Coin format — changers dispensing two coins and both welcomed at every washer and dryer. Others tweaked the formula by paying out strictly dollar coins, setting all prices in whole dollar amounts, and inviting quarters through the door under what’s known as “Dollar Coin Mostly.”

In either case, patrons who had grown accustomed to using quarters could do so.

Today, Dual Coin and Dollar Coin Mostly continue to wean laundromats off quarters, achieving collections of up to 80% dollars.

Coining yet another phrase

You can thank social media for introducing the third pay tier, Dollar Coin Only — a quarter-less environment where customers pump bucks into drops and owners dump ’em back into hoppers.

The single coin format, punctuated by a pitch to ditch quarters, is a fixture on an association-sponsored online forum with the host’s blessings.

Curious operators are led on a journey to leap from one coin to another by tinkering with old quarter mechs or employing new electronic drops set exclusively for dollar acceptance.

The online exchanges draw an impressionable audience, most of whom have never heard of dollars used in a laundromat. Frankly, I stopped counting the number of owners who’ve told me they thought dollar coin pay just meant Dollar Coin Only.

Oddly out of touch

Dollar Coin Only is known to pack the same punch as loyalty cards when it comes to knocking out quarters. While that may be true, the format seems oddly out of touch with an industry where those small coins aren’t going anywhere fast. Nine out of ten laundries accept them.

Heck, even the biggest players in card pay reversed course and brought back quarter compatibility with development of their hybrid systems.

Laundromat operators and the distributors who design stores are likely to take the path of least resistance. That means sticking with quarter increments on washer base pricing, cycle modifiers and dryer time.

Whole dollar washer vending and full cycle dry are the exception rather than the rule, posing a major roadblock for widespread implementation of Dollar Coin Only pay.

Sorting through the differences

While both feature changer-dispensed dollars and machines priced in $1 increments, Dollar Coin Only — like traditional Quarter Only — skips sorting.

That’s trumpeted a lot online but, in reality, separating $1,000 per minute by high-speed sorter has never been a big deal.

On the flip side, a Dollar Coin Mostly store takes in quarters at washers and dryers arriving with customers. For the typical operation, that translates to about 20% of revenue, or roughly $20,000 annually for a laundry doing $2,000 weekly. Not exactly small change.

You decide: Do four quarters make a buck or not?

From my vantage point, Dollar Coin Only’s hardline stance on killing quarters has turned off way more owners than it turned on. There’s an untold number who are in need of circulating dollars, but remain on the sidelines or take a detour testing out alternative pay formats that won’t significantly reduce their dependence on quarters.

In short, Dollar Coin Only has postponed — rather than promoted — laundry’s long overdue move to adopting higher denomination coinage.

Will laundromats ever run on dollars alone? I posed that question as well to the wisest man in coin-op pay.

His response: You’ll see a $2 token paired with the quarter before that happens.