Pulling back the curtain on laundromat pay 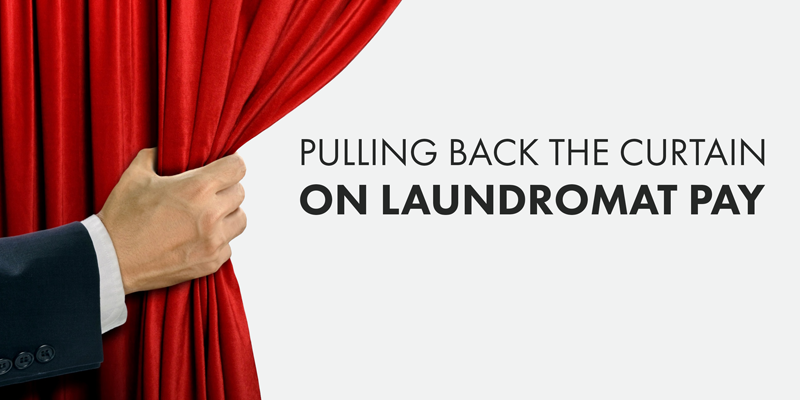 The curtain is getting pulled back on the mystery of how laundromat customers pay.

A January snap poll found eight in ten operators receive most of their self-service machine revenue in the form of coins. That’s right, 80% tally up more coin receipts from washers and dryers than any other payment method.

Seeing coin-operated transactions dominate the revenue stream will shock many. After all, it runs counter to a sales-driven narrative that customers favor a laundry experience without cash.

So if old school coin does so well, how about the new kid on the block — pay by app?

When asked last May what percentage of machine revenue they recorded from smartphone app or mobile wallet payment options, the overwhelming majority of laundromat owners — some 84% — achieved under 10%.

The poll was repeated in December and this time around it was six-in-ten below the 10% mark.

That popular social media platform is helping shine a light on what matters most when it comes to laundromat pay: How customers spend.

And the survey says…

Consumer pay habits are widely studied in the business world. Unfortunately, the same can’t be said for vended laundry, where the focus has been squarely on operator — not patron — preference.

According to the Coin Laundry Association’s 2020 survey, 89% of owners offered washers and dryers with a quarter pay option. The next closest were credit card — coming in at 27% — and proprietary card at 18%. As for smartphone pay, it was on tap inside an estimated 11% of stores.

While the yearly study summarizes installations nicely, it falls short of revealing what those standing at machines do before hitting the start button.

Today, there are more payment choices than ever before — some familiar, some not. Giving patrons options is one thing. Getting them on board is another.

Questions continue to swirl around whether customers prefer to plunk coins and tokens, swipe plastic or tap smartphones. Operators aren’t getting straight answers and that’s a shame. Choosing a payment format is one of the most critical management decisions they face.

It’s not easy untangling what happens on wash day. Is loading a proprietary card with a $20 bill just another cash transaction? Are people using both an ATM and changer considered credit card or coin customers?

Even defining what’s what in the laundromat isn’t clear cut. “Hybrid” can mean coin + credit card to some and coin + token to others. Both are cash/cashless tandems, yet rarely uttered in the same breath.

If this all sounds confusing, you’re not alone. Thankfully, one social media outlet is stepping up while the industry’s legacy pollsters have been sitting back.

The Laundromat Owners Showcase Facebook group I launched a year and a half ago has grown to over 2,000 members, surpassing the paid ranks of coin laundry’s decades-old association.

More importantly, it’s the only laundro-centric gathering where the community’s pulse is taken on an almost weekly basis.

Showcase survey questions are designed to engage operators and deliver the answers they’re looking for. And while these snap polls are unscientific, there’s no denying their appeal as responses are tabulated in real time with full transparency.

It’s been a long time coming. For far too long, self-service laundry has been measured the same way. Flip through past national studies and the questionnaire is almost a carbon copy. That cookie-cutter approach is stale.

Compiling statistics of machines on the floor by poundage doesn’t shed light on which records the most turns. Reporting the store’s combined utility percentage against revenue won’t track the impact of skyrocketing water and sewer rates. And checking off a laundry list of installed pay options isn’t telling anyone what’s ringing the till.

The story of today’s laundromat can’t be told with data that barely scratches the surface. Owners want to drill deeper, much deeper. Their livelihoods depend on it.

Take a look behind the curtain. You’ll be joining a lot of operators who are no longer left in the dark.