The heat’s on dryer pricing 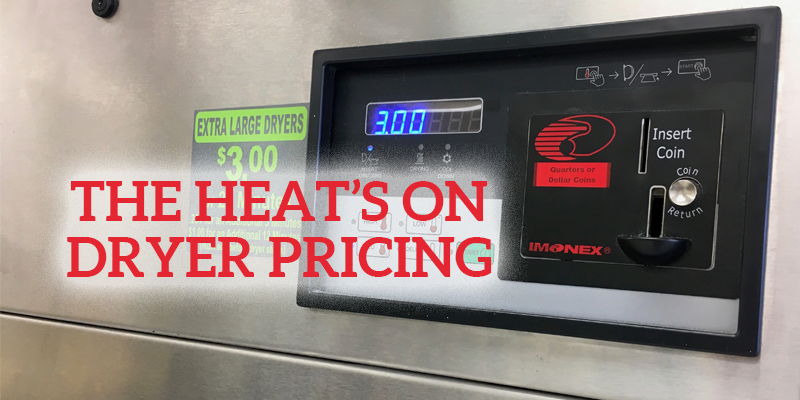 Dryers are where the laundromat business really takes a tumble.

Owners find themselves running out of time as they battle high costs with low denomination coins.

For some, dryer pay has already spun out of control. They’re delivering just two minutes — one heated and one cooled — per quarter. That’s 15 coins for a half-hour run!

The downward spiral has customers doing a slow burn and for good reason. Nobody likes things taken away, especially time.

Operators are zeroing in on coin meters because of what’s happening over at their utility meters, where gas averaged $14.21 per thousand cubic feet nationally in August — up nearly $6 in two years — and electricity hit a new average high of 13.45 cents per kilowatt hour, jumping 16% from a year ago.

They’re also getting hit on the floor. Price tags for new tumblers are topping $100 per pound of rated capacity and store rents to house them are seeing big CPI bumps, all while vend increases aren’t keeping pace. Nearly two-thirds of respondents to a Laundromat Owners Showcase Facebook group poll report machine price hikes over the past 12 months were below September’s 8.2% inflation figure.

Dry vs wash is out of whack

Operators continue renting out dryers for far less than washers despite sky-high costs. Based on the most popular vend prices cited in American Coin-op’s latest annual survey — six minutes per quarter to dry and $3.75 for a 30-pound wash — half-hour spins in twin stack pockets will generate $2.50 while a pair of similarly-sized front loaders pull in $7.50, a whopping five-buck difference!

Why the huge imbalance? Many inherited the decades-old quarter-only dryer start and never moved off it. As costs rose they either knocked down minutes or moved across the aisle to bump up washers. Most did both.

Disproportionately high wash prices lead to overloaded machines and overstuffed money boxes, as well as an uptick in customers scrubbing away at home before running out for a cheap dry. Low cost tumblers penalize those who wash while subsidizing dry-only walk-ins.

Now more than ever the heat is on laundromat owners to find a fix for dryer pay.

The solution: Full cycle vends powered by high denomination dollar coins. Operators can increase profitability and customer satisfaction by upping both the minutes and the coinage.

Self-service laundry works best in “set it and forget it” mode. That’s how washers operate and so can dryers.

Success hinges on programming a sweet spot so even a drum full of jeans won’t be damp when the cycle expires. Given so many variables — fabric type, wash extraction, machine model and design — it’s best to test loads on-site before pulling the trigger.

I’ve seen cycles range from 24 to 36 minutes, with many opting for 30 because half an hour is easy to remember and clicks with people.

Dollars — alone or combined with quarters — mean fewer coins and fewer opportunities for customers to think about price.

If your store’s at a quarter for five minutes it’ll take six coins to spin a half-hour dry. Now imagine a dollar coin buying fifteen minutes and just two of them firing up a full 30-minute cycle while you pocket an extra 50 cents. Less coinage, more profit.

Remember the two-minute-per-quarter vend I mentioned at the opening? Let’s suppose those owners converted to full cycle and dual $1/25¢ acceptance. They could deliver that same 30-minute tumble with as few as 4 coins instead of 15 — and collect $4.00 rather than $3.75.

Dimes to quarters to dollars

Laundromats have always taken on higher costs with higher denomination coins. First it was dimes, then quarters and now dollars.

Looking to maximize profitability without running out the clock? Up your minutes along with your coins. After all, dryer pay is all about time and money.