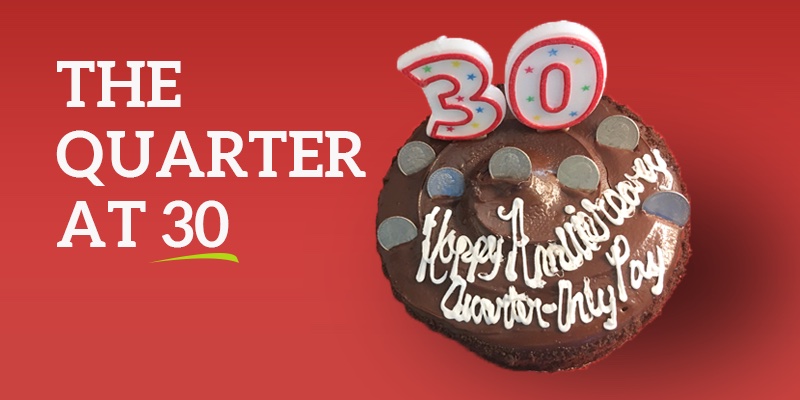 It’s been 30 years since laundromat owners pulled out the last remaining dimes and ushered in a new era of quarter collections.

I helped pen the dime’s swan song in a 1992 industry report. It was music to the ears of store operators eager to boost machine vend prices and handle fewer coins. So long, 85-cent top loaders. See ya later, 10-cent dry meters.

The move was inevitable. Small washers were getting bumps of 5¢ or 10¢, and one thin dime bought precious little dry time. One look at the all-quarter big boys told the story of where things were eventually headed.

Vending with a higher denomination coin simply made sense. Sure, it took a leap of faith to jump from 75¢ to a buck on top loaders and trade dimes for quarters on tumblers. But owners did just that and never looked back.

Most of today’s operators weren’t in business 30 years ago. Some hadn’t even been born. Yet everyone feels the impact of that watershed moment went dimes were washed away and a bigger coin took hold. Here we are in 2022 and, remarkably, quarter-only pay still dominates the American laundromat landscape.

The quarter’s 30-year run speaks volumes about the staying power of coinage in a business that has seen its fair share of technological advances. Nothing, but nothing, has dethroned King Coin. Not proprietary cards. Not credit cards. Not smartphone apps.

After three decades, we’re still embracing the laundromat’s core business model: Generating a profit from the public tossing in their clothes and coins.

Many find themselves behind the eight ball from the get-go, taking delivery of the latest-and-greatest large capacity washers and dryers outfitted to accept a single small denomination coin. Instinctively, they follow the herd, raising the number of coins per wash and lowering the minutes per dry. It’s a vicious cycle that guarantees everybody handles more quarters.

What’s been the industry’s response to all those coins?

Machine manufacturers keep kicking the can down the road by enlarging coin vault areas.

And proprietary card developers are reinventing decades-old plastic pay in the hope that some day, some way, the coin-op industry will be called the card-op industry.

Every step of the way, a laundry list of new expenses got added to the self-service transaction — loyalty card replacement costs, credit card processing, chargebacks and mobile pay fees. A bunch of money that used to hit the collection bucket is now being pocketed by middlemen.

The other side of the coin

One group of innovators has always been there to help operators maximize store profits and minimize coin handling.

Designers of coin acceptance devices were ready back when laundromat pay transitioned from a mixed bag of quarters, dimes and nickels to quarters-only. Horizontal washer slides were reconfigured to process coins vertically, while dryer mechs graduated from dimes to quarters within the very same footprint.

And while everyone was getting in the groove with quarter drops, developers remained ahead of the curve with mechanisms to handle laundromat’s next generation coin: The dollar.

One such innovation paired dual coin acceptance with the simplicity of a single inlet, creating a customer friendly payment stream welcoming any combination of dollars and quarters.

For years, everything has been in place for operators to circulate and accept a bigger coin. Those in the know have long been embracing dollars.