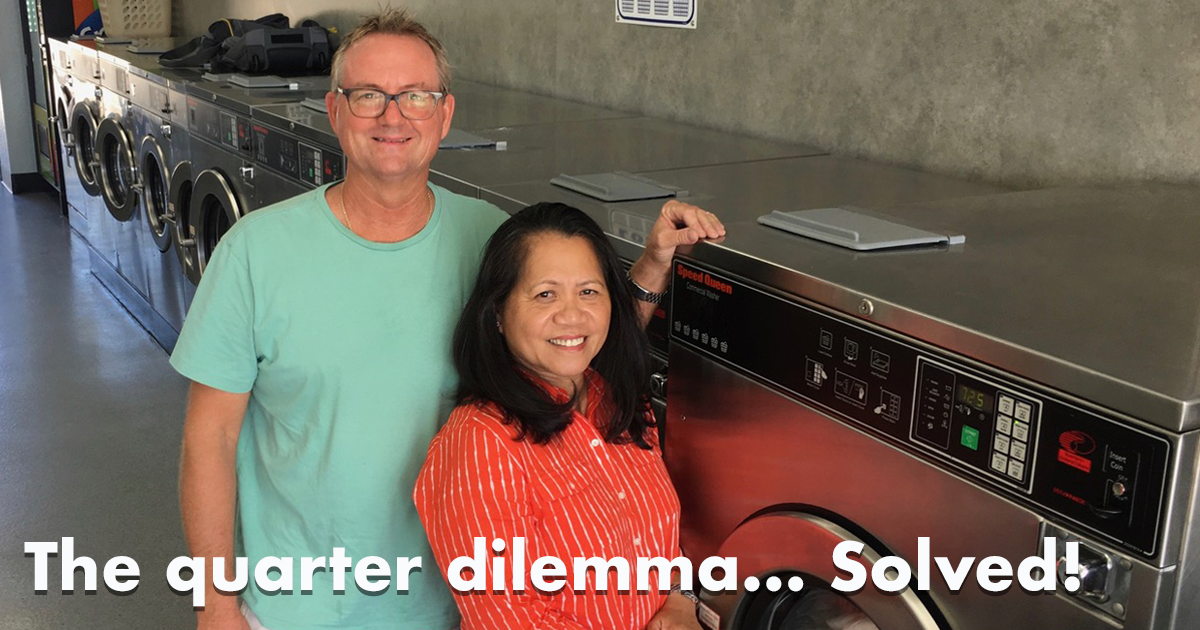 Quarters made sense back when wash used to cost a few dollars, not eight bucks. The supersized machines of today may hold a lot, but the money boxes sure don’t.

Scott Badarak in San Diego saw the writing on the wall. He’s a lot like you — smart, industrious and knows his way around the tool box. A general contractor by trade, he rolls up his sleeves turning around old laundromats and is providing a nice livelihood for his wife Tina and their family.

As his chain expanded and more big iron hit the floor, he faced what you do — the quarter dilemma. Scott was trying to cope with the problem of too many small coins.

His machine vaults were filling up fast and the bill changers had an insatiable appetite. And then there’s the apartment dwellers who’d stop by to bank coins for use back at their building’s top loaders. Ahh, the joys of owning quarter-only laundromats.

Scott knew he had to solve the quarter conundrum, but what were the alternatives?

Hiring staff and running up a payroll at his unattended stores so he could go cashless loyalty card certainly wasn’t in the cards. What about a credit card hybrid at every machine? How many would opt for that and what would be the price tag to install, operate, maintain and replace them? What else may be out there or over on the horizon?

The crossroads where Scott stood is the same one that active and would-be laundromat owners inevitably reach at some point. Which way do you go to get beyond being just a quarter laundry and discover new revenue?

Customers are the driving force

Payment is more about human nature than it is technology. People become conditioned to using something and like to stick with it. Changing things up doesn’t go over well.

It’s the customers paying to wash and dry who ultimately determine if your laundry can get beyond a quarter laundry. They’ll take the journey if you lead them on a simple path without roadblocks.

New and different ways to pay interrupt a customer’s routine and challenges them. You may be dazzled by what goes on in retail by putting your faith — and hard-earned money — behind gadgets, believing card readers at every machine will do the trick. The reality is that when patrons are given a choice of coin or credit at the laundromat, the overwhelming majority stick to plunking rather than swiping.

Next time you hear someone boast that 15-20% of their base use credit card readers, keep in mind they’re still left holding the bag on a quarter store that’s 80-85% full.

The new laundromat smartphone pay craze has enough apps to fill an iPhone screen. While still in their infancy, these downloads are streaming in at a time when big names in mobile pay are experiencing a failed connection with the American consumer.

JP Morgan Chase, the country’s largest bank, is pulling the plug on the much ballyhooed Chase Pay standalone app after just three years. The platform’s demise will join the likes of Citi Pay and others to the graveyard.

Reading between the lines, these big financial institutions couldn’t convince the public to change habits and pull out their phones.

What about other giants like Apple Pay and Walmart Pay? A recent online article by pymnts.com revealed the Apple app getting tapped nationwide only 6% of the time, while Walmart’s is being used in 3.6% of transactions at its own brick-and-mortar checkouts.

Will laundromat pay-by-app follow suit and plateau with similar low adoption rates, leaving owners sitting on hold with a quarter-mostly coin-op? Or will mobile at the coin-op outdo those big guys, who poured millions into campaigns hoping to get the public on board only to wind up with dismal results that can’t even hit 10% years later? Early reports from the field are not encouraging.

Hybrid that hits the mark

Meanwhile, back in San Diego, Scott made a decision to go hybrid, but with a unique one-two punch. He’s enjoying less frequent collections employing dollar-valued tokens and is credit card-ready storewide with just one reader.

Scott took a simple path that his customers follow with ease. Watch how he went beyond being a quarter laundry owner in his own words here.

For him, the quarter dilemma has been solved!