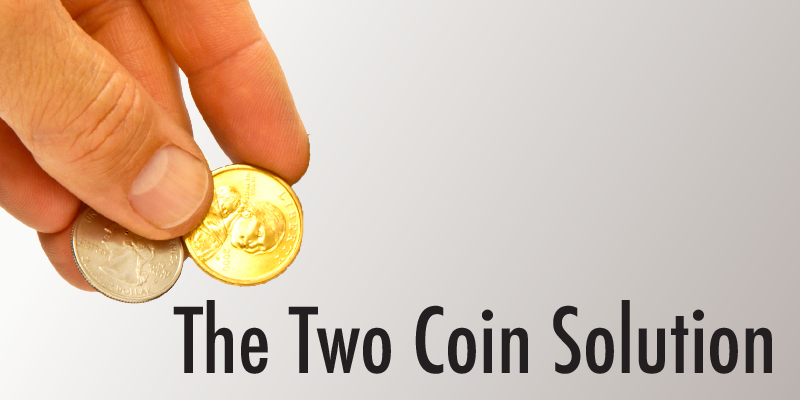 The laundromat industry’s long overdue move from quarter-only to dual coin pay appears to be taking hold. Dollar coin acceptance is up six percentage points and now ranks as the third most popular vend option, according to the latest Coin Laundry Association annual poll.

Quarters aren’t gone — not by a long shot. They’re still welcomed by 82% of the laundry owners surveyed. But on the other side of the coin, operators running quarter-only vended stores dropped ten points, from 63% to 53%, in another clear sign of the shift.

Working with both dollar and quarter coins is foreign to most operators and distributors. And who can blame them? Keeping it all quarters at the laundromat for a quarter century is a long time.

Many newcomers to the two-coin pay format believe it calls for doubling up on coin drops, while others think it’s time for a high-tech mech. Those who’ve been in dual coin for years know there’s a simpler solution.

Two coins require two coin drops — one for quarters and one of dollars — right? Surely patrons can figure out the correct slot if you place them side-by-side, wouldn’t they?

Dropping a quarter in the dollar slot is a real crap shoot. If it’s returned, customers get a redo. If it jams, they’ll get mad. If it falls through without registering, they’ll get really mad. And if that quarter counts as a dollar they’ll be happy, but the owner who got taken for 75 cents sure won’t.

Installing two coin drops side-by-side to handle each denomination not only adds cost, but complicates an otherwise simple transaction. Your customers aren’t out to cheat you, but they do make mistakes.

The bottom line: Two inlets for two coins is unfamiliar territory for laundromat patrons accustomed to using just one.

Many agree with the above statement and believe it’s best to rely on technology when it comes to dealing with more than one coin. They embrace a single inlet electronic drop that can be programmed to accept the coins they want and reject everything else. To them, it’s easier to teach the coin drop than the customer.

In theory, the electronic devices should reject bad coins. In practice however, good coins also get returned. While the coins remain the same, the electronics and environment change. Over time, a high-tech mech simply doesn’t understand the coins and kicks them back.

Sadly, store owners are clueless as to what’s happening because word never reaches them. People like to complain when they lose money, not when they get it back.

All that lint flying around a laundromat impacts the coin drop environment. The fuzzy stuff takes refuge inside, clinging to soap residue and other debris. It’s far from an ideal condition to try and read coins electronically.

Single inlet drops designed to manually separate coins without electronics are tailored to fit the dual denomination pay format. How the coin is handled during the roll down determines what makes its way to the vault. The only sensor involved triggers pulses, not the judgment call as to whether a coin is good or bad.

By erring on the side of acceptance rather than rejection, all the good coins pass. The tiny fraction of undesirable ones that make it through and get credited is a small price to pay for keeping cash flowing and machines operating.

Dual coin pay is definitely on a roll in laundromats. If adding dollars is on your mind, remember there’s a simple solution to do the job.

The goal is to make money, not turn it away.