Time for your own money system? 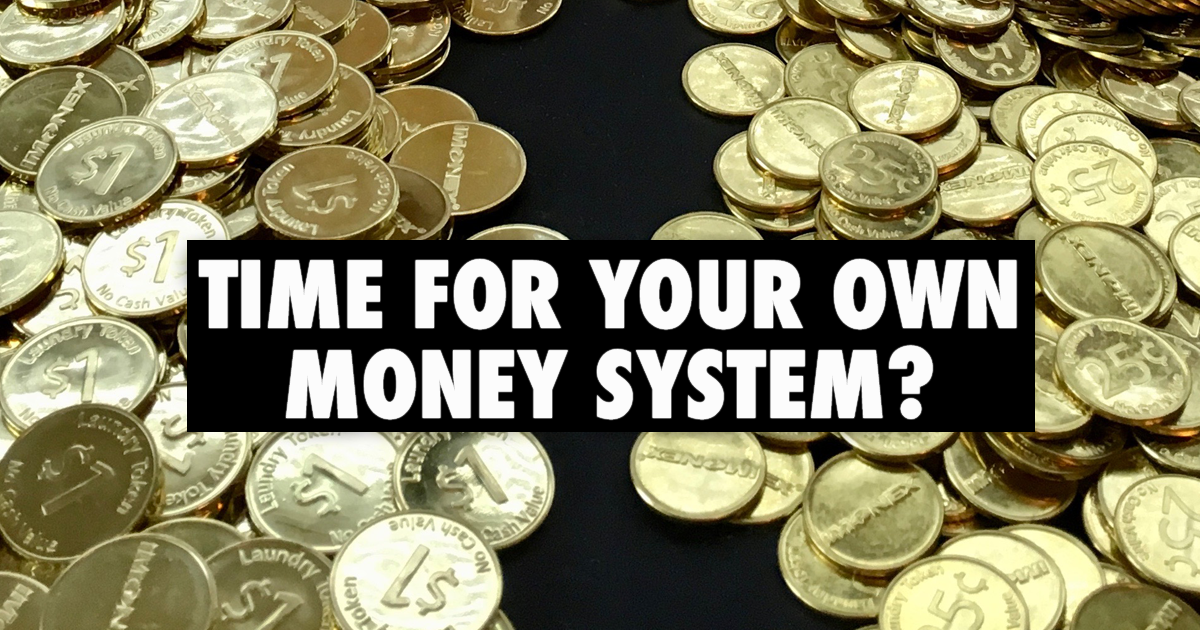 If there were any lingering doubts as to how big a role coin plays in the laundromat business, then the pandemic surely put those to rest.

In June, just as self-service laundry traffic started picking up, store owners got another punch to the gut when quarters began disappearing from changer hoppers as fast as toilet paper on store shelves.

With activity down and the fear factor up, coin circulation throughout the economy seized up. Laundromat operators found themselves in a perfect storm as businesses and bank lobbies closed, consumers clutched their money, retail vending machines sat idle, and the US Mint briefly slowed new coin production.

Given that eight out of ten laundromats take in quarters at washers and dryers, the impact was felt in a number of markets — big and small — from coast to coast. Simply put, the lifeblood of the industry wasn’t flowing as it should.

For many coin-op owners, the cutoff of circulation to their payment system was a stark reminder that a plentiful supply of change is as critical to daily operations as water, gas and electricity. After all, you can’t run machines without customers pumping in money.

Remarkably, even laundries which historically generate excess coins saw their overflow buckets getting lighter as more and more quarters rolled out the door. The culprits: Quarter bandits armed with bills, not crowbars.

Among the usual suspects were apartment dwellers making a beeline to changers and bypassing laundry machinery. Joining the parade of non-patrons were local business staff and anyone else needing spare coins. With walk-up bank lobby services curtailed and grocers saying no to a roll of quarters for a ten, laundromat changers became the neighborhood’s go-to favorite.

On the floor, owners did what they’ve always done — posted signs, offered up friendly reminders or harsh scoldings, and tried their best to police inventories so regulars could have coins to wash and dry. Some went high tech, eyeballing suspected quarter bandits by camera and killing the changer’s power supply via a remote-controlled switch.

Back on social media, the Laundromat Owners Showcase Facebook group initiated a matchmaking service for the haves and have-nots. The platform, where owners could connect and privately exchange wads of cash for much-needed bags of coins, was a quick fix for those coping with a broken supply chain.

Like the pandemic itself, there were pockets of the country where laundries experienced little to no disruption of coin inventories and just carried on one quarter at a time.

Many operators weren’t as lucky. They came to the realization that a quarter-only pay system — as simple as it is — doesn’t have built-in redundancy. In other words, no backup in the event of failure.

Among the laundry formats weathering the disruption well in the early going were dollar stores. The Fed’s rationing of low denomination circulated coins — pennies, nickels, dimes and quarters — didn’t extend to the billion golden bucks stockpiled inside government vaults.

It was business as usual at the changer, where dollar-only or blended dollar-quarter payouts served paying clientele and repelled outsiders.

Quarters just don’t get as much play in laundromats that circulate dollars, helping to absorb any shockwaves generated by government or banking industry policy. Mixed dollar-quarter dispensing means fewer quarters filling hoppers. And in “dollar coin mostly” laundries, the only quarters are the ones brought in by patrons and happily accepted at dual coin-capable drops.

While dollar laundries seemed immune to the pandemic, scattered reports began filtering in by mid-July that select banks weren’t completely filling some customers’ standing orders for boxes of rolled $1 coins.

The question as to why dollars were slow to make it out of the vault will hopefully be addressed and acted upon swiftly when recommendations by the Federal Reserve’s newly-formed “U.S. Coin Task Force” are announced in the next few weeks.

All the coin news stimulated renewed interest in what many dismiss as an old school payment solution — tokens. Take a look around and it’s the lucky owners of token-operated laundromats who are laughing all the way to the bank. They kept the flow going using their own money system and without the help of Chase, BOA or Wells Fargo’s coin supply.

These savvy operators — not the Fed or banks — remained in control of how things at their store are valued, stocked and circulated. Each token is purchased far below face value from a private mint and functions the same as the real deal when it comes to satisfying a vend price.

Their patrons know instinctively how to spend tokens — whether valued at a quarter, dollar or even two dollars. And owners certainly don’t lose sleep when a dollar-valued token that costs a quarter gets pocketed and heads out the door.

Some owners circulate higher value tokens with quarters, while others go all-in, all-token. Then there’s those who’ve tapped into an emerging hybrid pay platform— cash, token and credit card-to-token. Any way you wanna roll, the tried-and-true coin-like alternative is starting to make sense.

Best of all, tokens are providing these operators a critical backup. The redundancy is right there inside the changers, as well as at every single custom dual coin/dual token drop installed on the washers and dryers.

It’s the kind of flexibility — and peace of mind — that can help you through the best of times and even a pandemic.