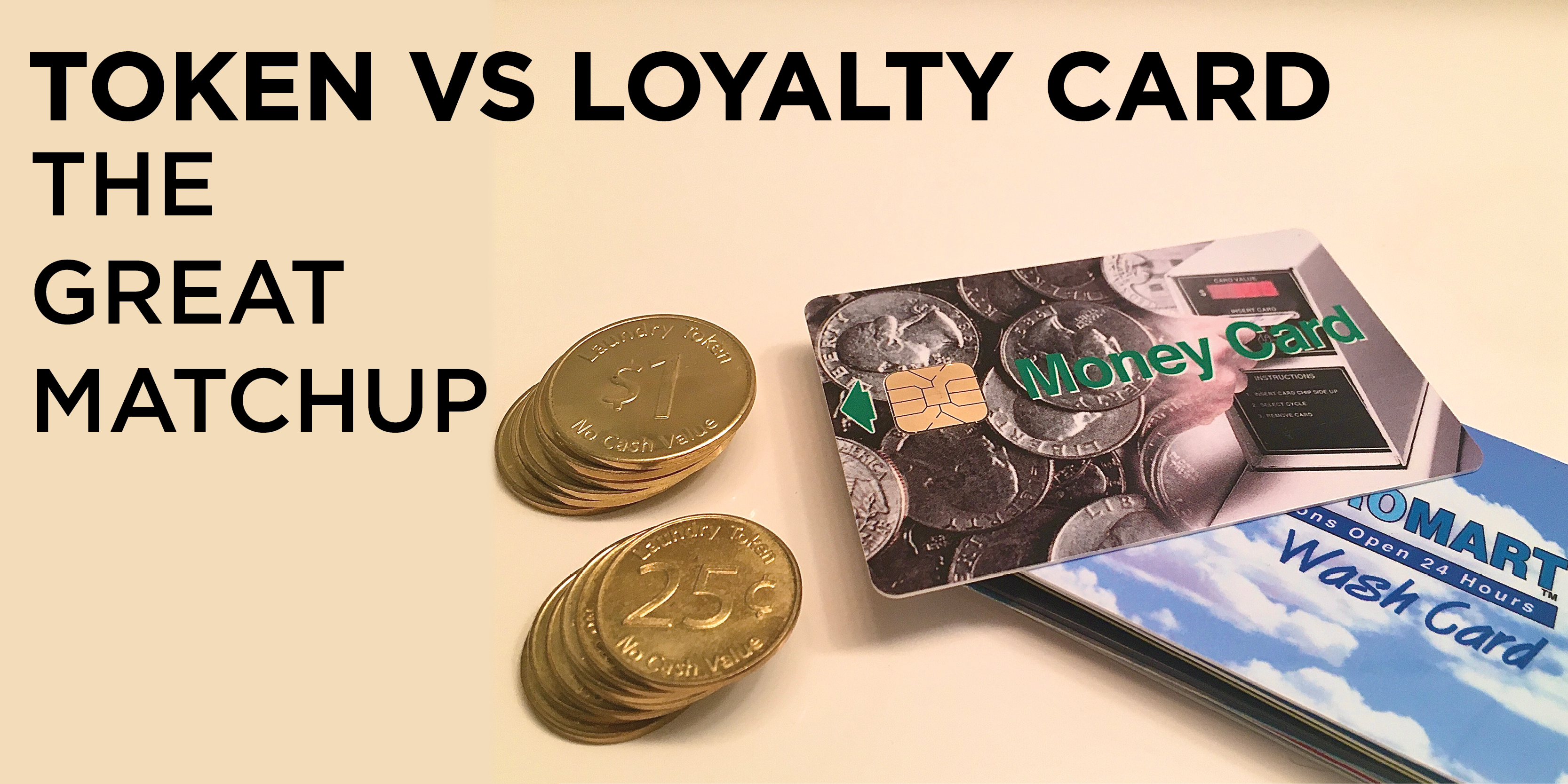 Forget the Coin vs. Card debate. Laundromat pay has an even better matchup — Token vs. Loyalty Card.

Let’s see how brass and plastic stack up against each other.

Washers and dryers which operate exclusively on cards won’t have stored cash. The same holds true for a 100% token-op laundromat.

Credit and debit cards can be welcomed at card kiosks, token dispensers, as well as laundry machines fitted with readers or token drops.

Card-only laundromats don’t have machine money vaults. Collecting is eliminated, but so is a critical self-pay backup. There’s no coin option available in the event of a glitch or system interruption.

Currency and credit card transaction bonuses, random prizes, discounts and coupon redemption are all on the menu at laundromats employing either a proprietary card or token format. It’s just as easy to come away with two extra dollars in tokens as two bonus bucks on plastic.

Granted, there are some token loyalty programs and promotions, including redeeming random prizes and facilitating discounts, that can’t be completed at the dispenser and require over-the-counter assistance or direct customer contact.

Loyalty card’s infrastructure and components are more expensive to set-up, maintain and upgrade than those in a token-op, which repurpose changers as dispensers and rely on cost-efficient, non-networked individual drop mechanisms.

One big and often overlooked expense is labor. Token-ops — like traditional coin-ops — can run without staff. I can’t ever recall visiting an unmanned loyalty card laundry.

The difference between what a laundry customer purchased and hasn’t redeemed is a simple way to understand float. Balances sit on cards and leftover tokens lie on dressers. Float can grow and be profitable over time when valued-added cards and loose tokens never return to the store.

Does float offset costs for owners? Yes. Can float be a pain point for cash-strapped patrons? Sometimes.

The trend today at card stores is awarding big loading bonuses. Those freebies — above and beyond the amount paid — may be floating out there, but they don’t represent found money if unredeemed. The same for bonus tokens.

Cards need to be stocked and replenished. Some owners charge customers for the privilege of going plastic. They recoup all or part of the card’s cost; others sell for even more.

Token-op patrons don’t pay-to-play. The ‘golden’ coinage they use carries no surcharge.

A dollar-valued token costs an operator about a quarter — representing a 75-cent float until redemption. Believe me, token-op owners don’t fret over round brass pieces walking away and smile when reordering.

Some loyalty card systems involve registration; token formats do not. While stored data can be beneficial to operator and patron, the process can be a turnoff for those hoping to wash without all the screen time.

Navigating registration frequently requires assistance from trained employees who may be called away from other duties.

Customers aren’t the only ones hesitant about participating in a networked pay system. Owners themselves have raised concerns over parties which may have access to store performance data.

Loyalty cards are sometimes employed as a time management tool for personnel.

Card systems offer reporting and remote management. These once-exclusive features now have plenty of competition as machine manufacturers incorporate their own proprietary software that is friendly to all forms of payment.

Any discussion of loyalty cards inevitably turns to penny pricing. There was talk about cents on a recent podcast that, frankly speaking, didn’t make a whole lot of sense.

The guest, a leading card system manufacturer, cited utilities as the driving force behind adjusting vends a few pennies rather than a whole quarter. He went on to explain how consumers are used to seeing price fluctuations at gas stations and come to expect the same when paying for laundry.

I was left wondering where oh where are these card store owners who regularly move machine pricing up or down in concert with incremental changes in water, sewer, gas and electric rates?

Are we supposed to believe prices displayed on card-operated washers and dryers rise and fall like pumps at the corner gas station?

They don’t. Card laundries instead resemble corner groceries, where a load of wash and a box of cereal cost $5.99, not $6. Ask yourself: Do people shop laundromats to save a penny on a front loader?

Less pain through less coinage on a six buck wash you say? Here’s how to save both time and money — Skip the card registration and surcharge by just simply dropping in six dollar tokens.