Tokens? You gotta be jokin’ 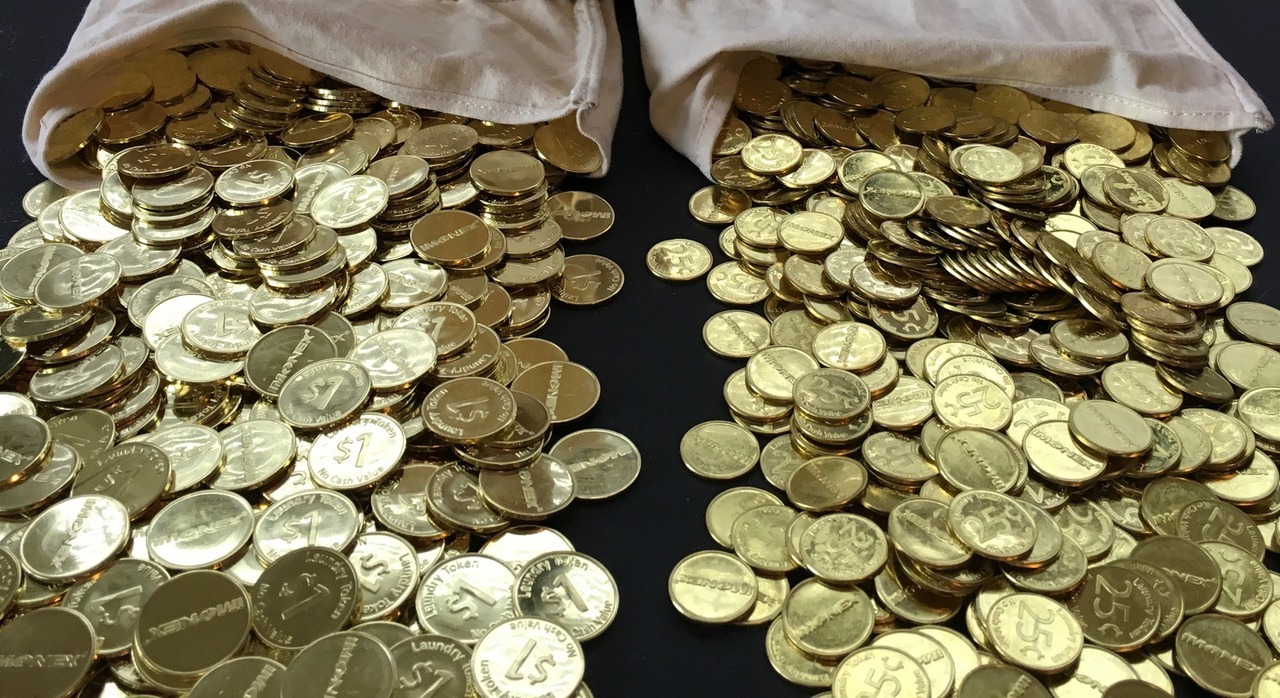 Get ready for the year 1984. That’s right, 1984. Van Halen topped the charts, McDonald’s sold 50-cent burgers and everybody loved their Calvin jeans. It’s also when the token-operated laundromat made a big splash.

On the east side of Milwaukee, Wisconsin, the newly-expanded Wash Tub Laundry Center was an oh-so-trendy sudsy emporium, sporting “Olympic-size” front loaders, a decorative water fountain, kids corner, TVs and — would you believe — an indoor putting green.

But what thrust this local laundry onto the national stage was its innovative pay format — a token-op, not a coin-op. I watched it happening in real time. You see, the Wash Tub was our family’s laundromat.

A little background is in order. Before tripling in size from 1,200 to 3,600 square feet, The Wash Tub ran on coins and had my dad ferrying nearly 8,000 of them a week between the laundry, home and the bank. Hauling coin bags hurt his back, and the prospect of adding thousands more to his workload with a bigger store weighed heavily on my mind. I knew there had to be a better way.

I found the answer in Philadelphia, where quarter-valued tokens had beaten the urban assault on laundromat coin vaults. The bad guys with crowbars wanted nothing to do with brass coinage, but the patrons sure did.

Those ingenious Philly operators knew how to build loyalty and get people spending. Customers had baggies of tokens and why not? Buy more to get more freebies. Washer price? Three tokens sounds way cheaper than 75 cents.

I was sold — the coins were gone and the cash kept flowing. All I had to do was sell dad.

Jack Cohen wasn’t a newbie when it came to alternative pay. Plastic tokettes and tickets? He’d been there, done that. And the very thought of what his son now had in mind for the five-store-chain’s flagship made this laundry vet chuckle. “Tokens? You gotta be jokin’!”

I ticked off each box in my checklist on converting every bill changer, Maytag, Dexter, Wascomat, Huebsch, Gold Medal and Vend-Rite in the house. And my drive out to our token supplier in Kentucky showed him I was dead serious.

I pitched my father and  convinced him to go all-in on all-token. To this day, it remains the toughest sale of my life.

Wash Tub customers dug the new pay format — changing bills for tokens on the wall or handing over credit cards for wrapped rolls at the counter — and started plunking away at the machines.

And then there were the promos. Big bills triggered a bonus, while a lucky random blue token kicked out from the hopper or tucked inside a paper roll was worth four. Happy Hour from 5 to 6 p.m. had $6 token rolls priced the same as time on the clock. Seniors got their free tokens each weekday morning.

Best of all, dad handled stacks of notes, not sacks of coins. Changers were cash registers — just grab the bills and out the door. With the money in hand, vault collections were done at his leisure.

Six months in, my father asked for the token company’s phone number. Turns out our initial 20,000-piece inventory was running low and thousands were missing in action. Needless to say, at eight cents each and a tidy 17-cent profit realized with every quarter-valued token walking out the door, it was one check he gladly wrote. The float alone paid for the store conversion in no time at all.

Not your father’s laundromat

Fast forward 35 years to the present and it’s easy to dismiss The Wash Tub as strictly old school. After all, who would dare mention tokens in the same breath as laundry pay’s uber-hip networked gadgetry and smartphone apps?

From northern Minnesota to the California coast and points east and south, progressive operators are teaming up tokens with dollars and quarters or using them exclusively as their private money system. They’ve got a true hybrid, but without the heavy hybrid price tag.